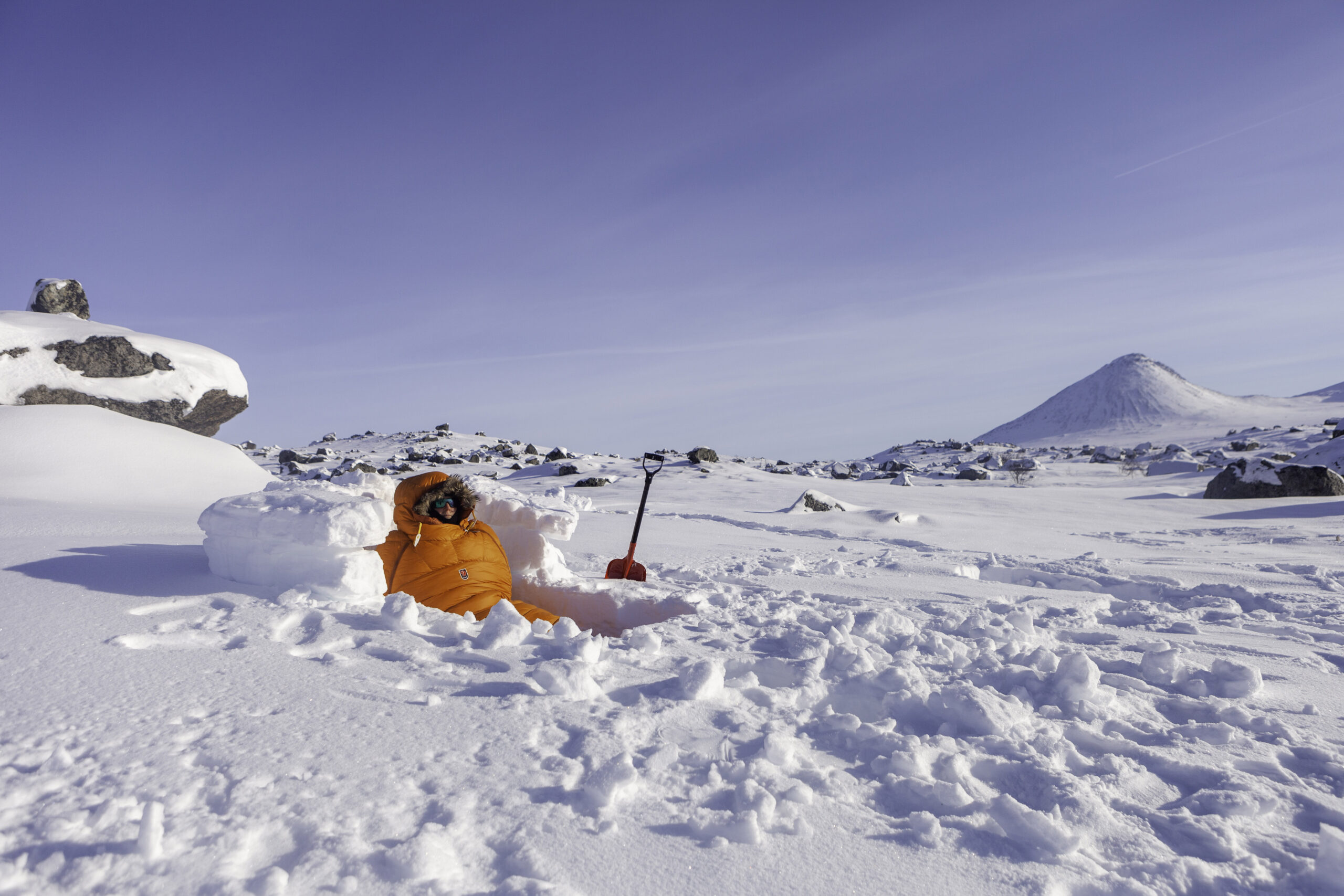 This year’s Sarek adventure I fulfilled with my friend Li. As always the first bit from Ritsem over Akkhajaure lake is a perfect beginning to see that everything works and to get into the right mode. The train and bus journey is a way to leave things behind, process whatever needs to be processed and arrive. After skiing most of the lake, we turned left (southeast) and crossed the bay to pitch our tent on the opposite side with the Akkha cabins visible on the other side. We spotted northern lights while brushing our teeth and then we quickly fell asleep.

In the morning we ate porridge with figs and apple. With that we enjoyed lukewarm orange juice. We zigzagged over thin snowfields, slowly but surely heading towards the south side of Akkha where we skied up towards the small lake by skiing along the creek at the bottom of the ravine. The ravine was wet and when I skied I packed the snow that quickly became dark and wet when soaked. It got stuck on our skis and sleds and we had to scrape off the snow several times with the help of our compasses. During the day, our path crossed 9 moose. A mighty sight when they stand on the edge of the ravine and watch us from above. 1kg of potato hotchpotch sat well that evening.

Nijak appeared the next day. We skied in and through Ruotesvagge. At the end of Ruotesvagge the wind picked up, the snowflakes were large and the visibility poor. We spotted two people with slightly larger sledges than ours. They came our way and stopped next to us. One of the guys quickly said “Hi Daniel!”. I smiled in surprise. It was my friend Stefan. He and I met unplanned in Sarek last year and ran into each other again this year without having coordinated this.

The next day we met two other people. They skied after us towards Salto and found a small piece from my camera that I sadly misplaced out there. Other than that we didn’t speak to anyone else for almost seven days.

Äphar. A fantastic mountain that is different from all other mountains in Sweden if you ask me. We skied across the lake. Going north. The ice was partly thin and at one point it cracked slowly beneath me. We chose to back up and zigzag around the area. The rocks were big and scattered all over the area as we approached Slugga. The wind picked up and we blew down below the tree line. Lake Pietsaute is 10km long and we divided it into two distances by camping in the middle. We ate well and lay down in our Fjällräven Polar. With our ears close to the ice we could hear it. Exciting sounds that made us fall asleep quickly. The last 7km or so the wind really picked up and we barely saw the markings along the winter trail. We had to use all our muscle power and skipoles to move forward one meter at a time. When a Sami on a scooter says its windy further ahead… Trust him or her!

The slope down to Saltoluokta station is long and the surface was hard of ice with some soft snow above it. Nothing that I can plow for a longer period of time and the fluffy unpacked snow on the side of the trail did not slow us down either. I fell a couple of times. Became slightly annoyed and in the end I went for it. Pointing my ski tips downwards and trying to master it for as long as I could. In the end I fell in a spectacular position and it took me some time to untangle myself and the equipment. An impossible position to do without skis and speed. I laughed and the people on the scooters passing by laughed. Then Li passed by with wide open eyes. She, too, threw herself into the snow when the trail quickly turned right. We laughed for a long time before we took the last turns to Saltoluokta for some food and long desired shower.

On seven occasions I have experienced this amazing place and I still hope for more.

Join me next time! Skidtur med pulka i Sarek or through PathfinderTravels