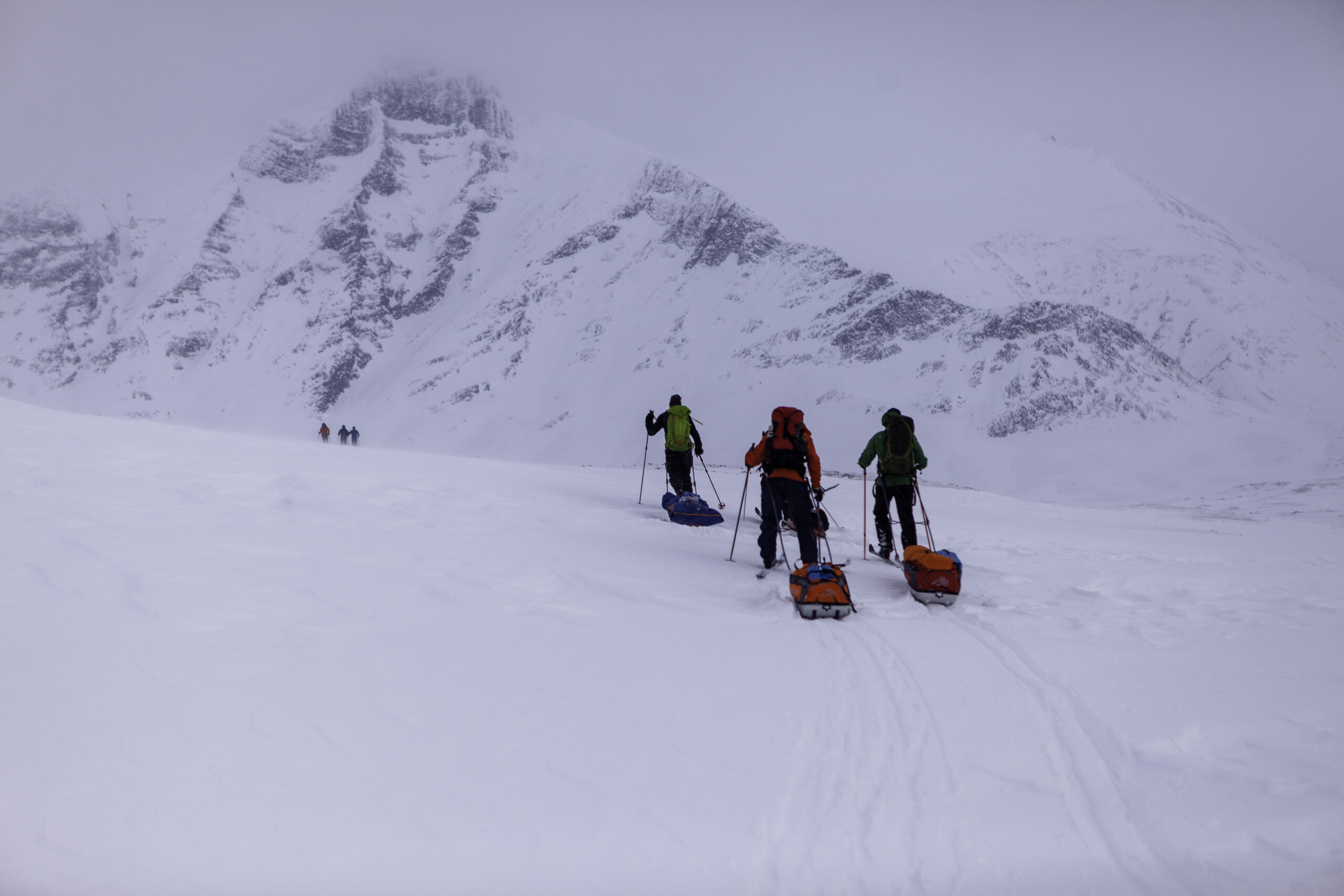 Well it’s been a couple of adventures up here by now. All of them special. This adventure turned out really good except some minor dents and bruces on both body and equipment. On this particular trip I had the pleasure to guide three people through what is called Europe’s last wilderness. With me I also had a student under education to become a wilderness leader. Loads of good food, snowdrift and decision making.

“Its like playing memory for eight days” – Kalle about camp life

“It was a windy morning and we tried to make sails from a wind sack and one artic bedding. We did not get any progress from the wind sack, but the guys who unfolded the artic bedding succeeded somewhat and took in on us that skied.”

“The Äphar massif appeared as we skied over the hill, the ravens were present as always as we rounded Bierikvarasj. I stood for a long time on one of the hills that evening and looked at the stars while the toothbrush hung in the corner of my mouth. Such a magical place!”

“In Ruotesvagge we only saw contours and the map could just as easily have been a white A4. I took a compass direction and told the group to aim their skies one glove to the left of the sun”

“Unplug you headphones. Nature has its own soundtrack”

“In late March 2022 I had the pleasure of attending a 5 people, 8-day ski/tent tour through Sarek , "Europe's last wilderness", guided by Daniel. I had some experience from a similar but shorter trip and had a few things of concern. Any such concerns were easily resolved with practical suggestions in preparational meetings and email conversations prior to the trip. Such matters could be anything from what type of food to bring, to "how to keep your gear and yourself dry" or hardware-oriented things like suitable skis.
Daniels experience from the actual route we were taking was very valuable and most likely saved a lot off efforts by avoiding unnecessary troublesome paths.

As a person Daniel possesses a wealth of knowledge related to outdoor activities, I found him to be a really pleasant guy with a very humble appearance. He had advice or answers to anything I asked about and was open to new ideas himself.
He took responsibility for the groups well-being, checking up on the team every morning and evening and during the day. He would occasionally after dinner come by the other tents and surprise us with a dessert, like cinnamon apples in vanilla sauce or a variant of "fried almond paste". Unbelievably tasty after a hard day.

I can highly recommend Daniel as a guide or mentor for these kinds of outdoor activities !”