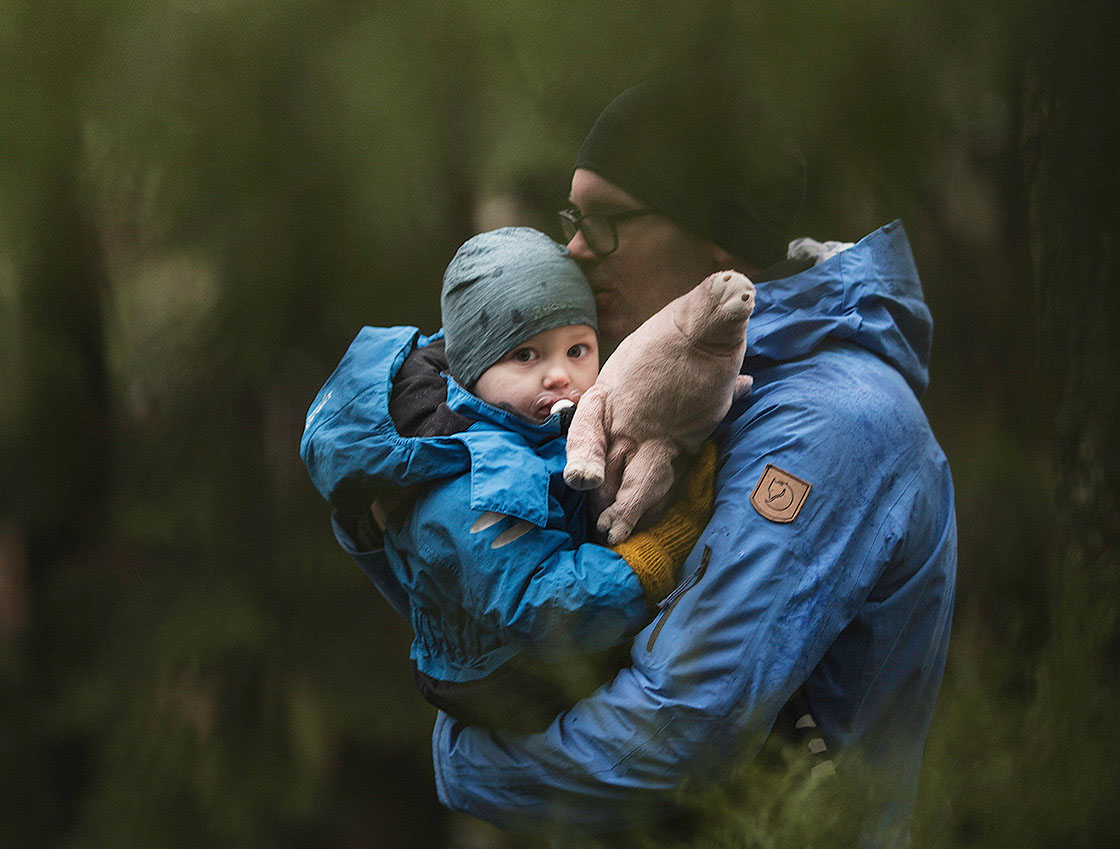 The last weeks before my daughter was born, there were a lot of thoughts and preparations. At the same time I wanted to go out on adventures. I have wonderful friends and one of them came over for a movie night in long johns and a t-shirt. We slept on the balcony and my wife took a picture through the window.

The family slept outside for the first time when Elsa was only 2,5 months old. We took our gear and picked a place with good transport and mobile phone connections throughout the night if we had to go home. We walked out and prepared everything, spent the day and talked about the night to come. Emelie and Elsa slept next to each other and because we were both beginners at having a baby in the tent, we didn’t sleep that well. I would say that Elsa slept the best. I think she felt secure and comfy wrapped in her clothes and sleeping bag.

When Elsa was 6,5 months old we hiked parts of the Kungsleden trail with cabins along the way. We often had other people looking at us. People mostly said good job and asked us a bunch of questions but there were also people asking question like why are you up here, she is too little, that we’re irresponsible and should walk back or even take the helicopter. We, or at least I, questioned myself a bit before, during and after the trek. Not judging but still wondering whether it was worth it. Am I doing the trip for her, for me, for us? I’m out a lot, conducting courses regarding outdoors, and guiding. But still I had my doubts as I know Emelie also had. I think we needed to try and we did. We didn’t succeed in walking the planned route but we learned a lot and were happy that we gave it a try. Sure we could have pushed through and walked as planned but we didn’t find the answer to why on this particular adventure! And here I think we were awesome! We went to Norway, Gällivare and Saltoluokta with all our gear and totally changed the plan during the event. Strong I would say, but at the same time very hard for me and I struggled a lot with our choices!

Elsa started walking when she turned one. During the first year she was not moving around that much. In cold weather, covered in insulation, crawling was a challenge in itself and we found her happy to mostly sit and explore things. We’ve spent days discovering leafs, small bugs, birds, looking at clouds, animals, roots and stones. Things I haven’t looked at with a deep interest as a grown-up, but with Elsa I rediscovered a lot of things and I’ve seen things I wouldn’t have seen in the same way without her. There are times when Elsa laughed at waves in the ocean, followed a bird until it disappeared behind a hill or a house and then looked at me for answers. For us, the key has been to have multiple choices and not a hundred must-dos during the trip. During the first year I think we had our best adventures when we walked less, took a lot of breaks and found happiness in small things, being in the moment without needing or longing for anything more.

When my friend came over to prepare for our upcoming winter adventure in 2019 we included Elsa. We packed our sled with her in or on it, we checked the map and planned our route. While she played Godzilla in the northern part we planned the southern part, we talked about food and snow conditions. Sure it takes more time this way but Emelie and I also decided to have a child and we want to include her in our daily life. I think this is important for future interests and to be one in the group. To feel safe and included. Same as for us adults!

When we pack for a night out, we place all the equipment and food on our kitchen table. It usually works great but sometimes we end up being annoyed at each other. Emelie and I are not in sync and Elsa unpacks and moves everything around. We, or at least I, get really stressed out and want to cancel the trip even before the gear is packed. I’m working a lot with this mentally and have become a lot better at it. I would say it’s normal. Sometimes we push through and at other times it’s not worth it and we do something different.

“She is a master of being in one place; the present, and I learn from her.”

“If she has been in a baby carrier for one hour or two she wouldn’t be satisfied with just a 10 min break no matter the weather.”

“Elsa dropped her gloves a lot so we decided to get attachments so they were easy to put back on. When you’ve backtracked a couple of times you know what I mean!”

“During the first year I would suggest to put tired parents into the equations, because it matters! I would also suggest you to keep your plans simple and have some “hard core” event in your back sleeve to do if you’re up for it when the opportunity presents itself.”

There is a lot of challenging moments but also a lot of magical moments and it’s all worth it!  Follow me on Instagram at @inspirational_outdoors to caught up on the latest family adventures.