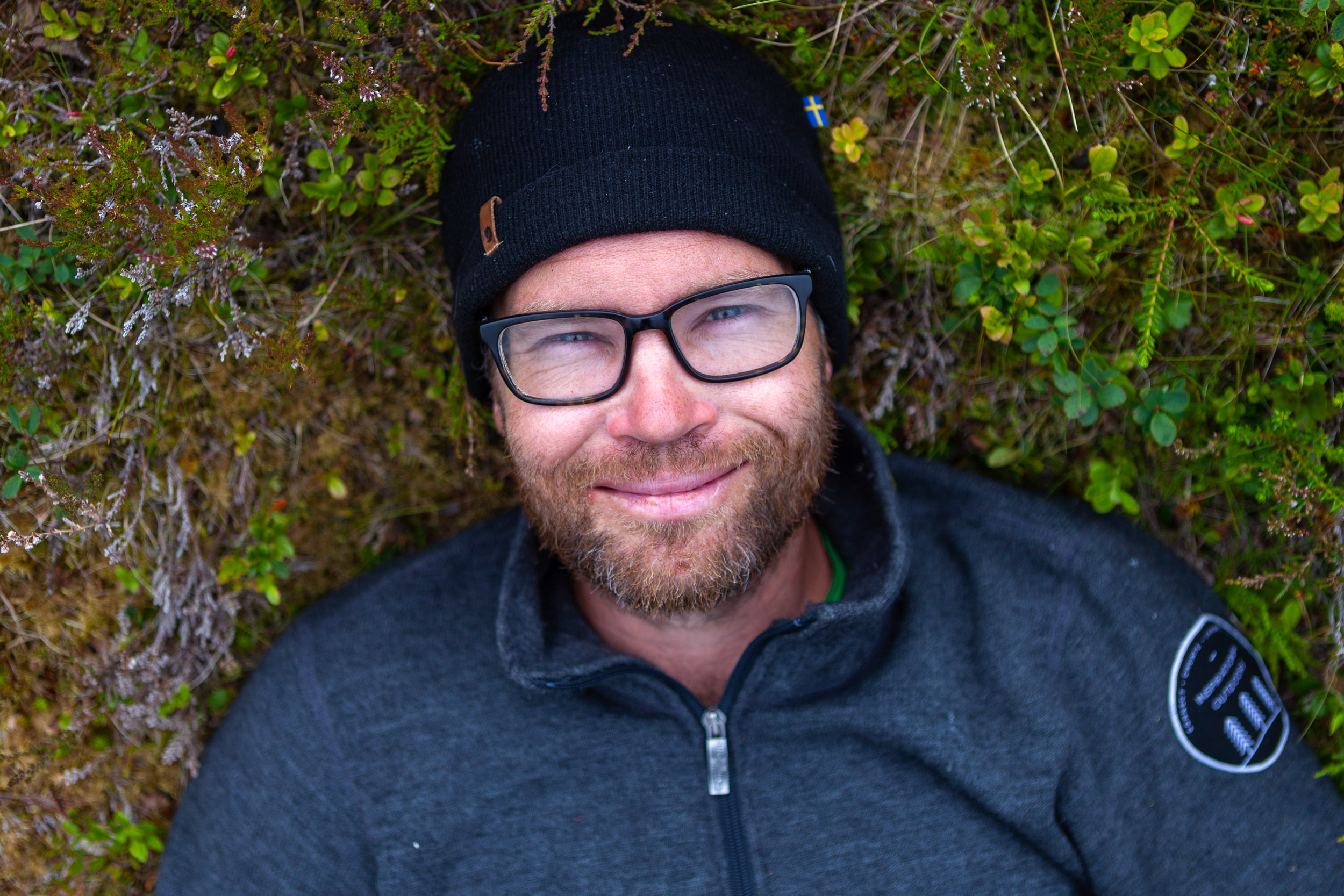 The reasons for studying to become a mountain and wilderness leader can be many. I spent a year and a half at Malung’s Folkhögskola in Dalarna, Sweden. The days were filled with adventures, great and small. I already had plenty of adventures in my backpack before going but still learned a lot. The importance of having both wings and roots is one of them.

During school we were four who, among other things had an adventure through Sarek as one of our major focus areas. We wanted to see the Rapadalen Valley when the autumn colours were at their strongest and the first snow settled on the peaks.

We had rented a car and driven to the Sourva dam where we now stood and put the finishing touches to our gear. With determined steps we crossed over to the south side and gained some elevation before pitching our tents. Our dinner was eaten on a rock as the extra height enabled us to look out over the treetops and the view across towards Saltoluokta mountain station turned out to be magical. Reindeer meat and red wine has never tasted as good as it did then.

The leaves were golden yellow and red. The iconic peak Slugga stood magnificently on the horizon and we looked at each other and smiled. We had arrived at just the right time. We slept well that night and in the morning we happily walked up the rest of the hill and above the tree line. The wind was cold and the terrain was wet. We talked about the importance of staying “warm, dry and fed”, a motto we try to live by and learned the importance of at school.

When we had passed Slugga and were approaching our camp-site for the evening, we quickly lost altitude and came down into difficult terrain. At least my boots got really wet before we realised the mistake and took action. We found elevated ground for our tents close to an old reindeer herder’s cottage. We ate our food and the smiles quickly returned. During the evening, two of us examined the possibility of fording a nearby river on our way back. We decide that it was a big risk and that we should walk the same route out. Back in the tent we talked about today’s highs and lows and took a quick look at the map before we went to sleep.

It snowed lightly and we rested our eyes upon a snow-sprayed Äphar as we passed another reindeer herder’s cottage and set course for the lakes north of Låddebakte. We sipped coffee while on top of a small hill before beginning the climb upwards, closing in on the lakes. The lakes had ice on them and the wind was chilly. When we had built our camp we pushed on further and climbed Låddebakte’s highest point. The last sunlight of the evening spread over Rovdjurstorget (predator square) and on the horizon we could see Nammatj. We climbed the peak and took some time to look out over this fabulous landscape, something I warmly recommend everyone to do, although accept that we are not all designed to walk down in the light of a head torch on slippery rocks –  an adventure in itself.

The last day before walking back towards the Suorva dam and civilisation, we decided to walk a little bit more in the Rapadalen valley and visit Axel Hamberg’s cottage. Just before descending below the tree line we lay down in the grass and once more looked out over the valley for a long period of time. We talk about life and why we like adventures. The gusts of wind in the valley made the leafs dance around us and we followed them with our eyes. We cooked some food at a rest area near the cottage and some of us took the opportunity to take a dip in the icy water. The main subject of our conversation was Axel Hamberg and what he had been doing in the area. On the way back, we took a detour to one of Sarek’s few emergency huts where we once again stopped for a break and took the opportunity to talk to another hiker who had settled in for the night to come. The ground turned white again. Snowballs were thrown and we even built a snowman before the snow melted and disappeared once again. Our travel plan and our hopes with the adventure were achieved with flying colours and the camera was filled with photos. It was time to head home!

A few months later we were again at the cottage but this time on skis and in my hand I had the key to Axel Hamberg’s cottage.

My first extended walk was completed in 2003. The walk started at Sweden’s southernmost tip and ended in Ytterhogdal three months later. Since then I have done several longer hikes in Sweden. Hemavan to Kilpisjärvi and Karlskrona to Treriksröset to name a few. In the spring of 2015, my mother told me that she wanted to do a once in a lifetime adventure before she got too old. We talked about it and in the summer of 2015 we embarked on our adventure. We walked the approximately 800km from St Jean Pied de Port to Santiago de Compostela along Camino Francés. We met people from all over the world and I realised that this is what I want to work with. We learned so much from each other when we dare to be ourselves and share our experiences and the lessons we have learned along the road.

The first year during the course as a mountain and wilderness leader, you have the chance to try everything and gain a greater knowledge of outdoor life in general. During the second part (advanced course in outdoor life), you can take your ideas and carry out larger projects as well as have deeper reflections. The choice is really yours!

Malung’s Folkhögskola is located on the outskirts of Malung and a wonderful mix of people to spend your free time with. The school offers various courses, knowledgeable teachers and many course participants with different ages and backgrounds. The focus in general is not to become something but rather to become someone. We do not compare ourselves with each other, we help each other and learn from each other, which suits me perfectly. We are encouraged to inspire and the teachers often take a step back and let us lead each other. During my days at school, I spent a lot of time writing and drawing on a whiteboard. I asked for feedback when people passed by in the corridor and most people took the time to listen and from time to time say something. My plans took shape and during the autumn I walked between the Portuguese capital Lisbon and Santiago de Compostela in Spain. Fulfilling a dream.

I have never been particularly amused by the idea of working in one place for a long time and I have often dreamed of tomorrow or the next adventure instead of living in the moment. If I stood in the valleys, I dreamed of the peaks and if I stood on one of the peaks I dreamed of the other peaks that I could see at a distance, always longing for more. Today is a little different. I enjoy being in the valley looking at the peaks and the surrounding nature. I don’t have the same urge to go up there. I feel good where I’m standing and know that I am in the right place as I have the feelings I do. Many of my dreams have gained wings as I have worked hard on seasonal jobs. Some years I’ve been out traveling more than at home. Thanks to school and wonderful teachers, I have understood that the answer to my questions have often not been as simple as a yes or no. They have given me guidance by giving me various tools to work with and helped me steer in the right direction rather than giving me a clear path. Today I know the importance of having roots and that everything gets so much better when I am rooted. Today I know what kind of person I want to be and have more self-confidence than I had before.