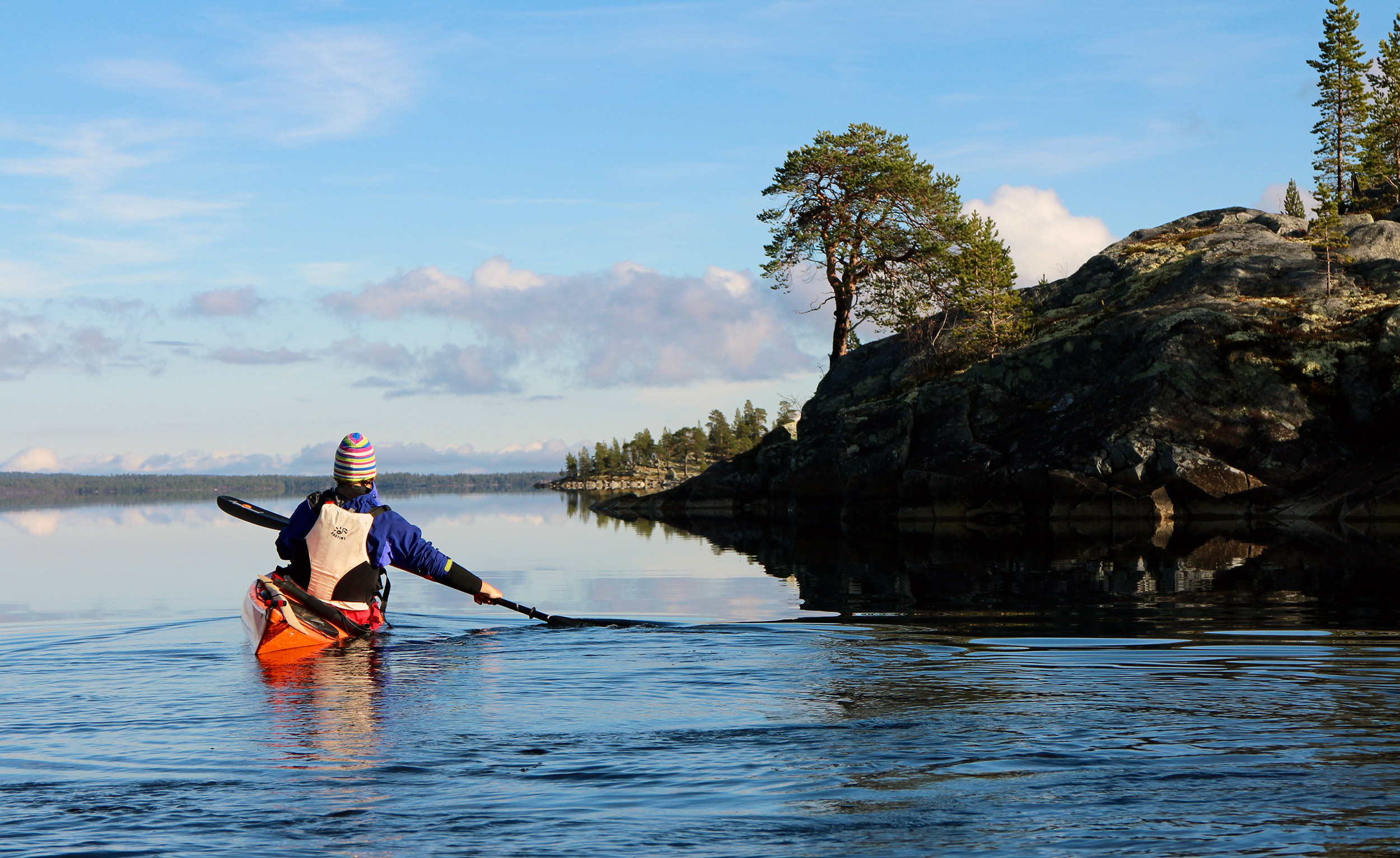 We began our weekend adventure in Kärringsjön, it’s at the end of a long private gravel road. There were nice cottages that could be borrowed if you wanted, people to talk with and a parking lot that we could use. We contented with parking the car there before leaving with our kayaks. There are a lot of small lakes in the area and you have to jump in and out of the kayak several times a day. But it’s worth it!

The first day we paddled as close to Skedbrostugan as we could and then we walked the last bit and stayed there for the night. During the afternoon it started to snow and it was a magical experience for me when I could see snow landing on my kayak. Gustav shouted that he had spotted something running along the shoreline.. We thought of wolves for a second and then realised it was reindeers. Still magical!

The second day we paddled southeast as close to Rogen as we could. Then we carried the gear and kayaks in stages between the lakes still wearing life jackets and skirts. On Rogen there were big waves and we surfed a lot. It was the first time I experienced this and it was a little scary as I didn’t feel like I was in complete control. The water was cold and Rogen is a big lake. We stayed close to the edges of it and stayed close to each other. We managed to make it without getting wet and we made the last paddle strokes of the day in Norway. I put the front of the kayak into a small waterfall and then we ended the evening pitching the tent nearby.

The third day was the exact opposite of the day before. There was no wind, the water was completely still and the morning fog was like from a fairy tale. The fog disappeared before we started to paddle on the lake and we silently moved slowly forward for a long time. Eyes wide open and completely calm.

The fourth and last day we paddled to STF Rogen (huts) for a shorter break before doing the final stretch in Rogen. We dragged the kayaks over some marshes and paddled over the small lakes back to the car.

If you like With kayaks in Rogen 2014 perhaps you also like Li and my adventures as we hiked around Lake Rogen Storloopen 2020 and  Storloopen 2022.

“Taking a Swedish fika every now and then is always nice. I had lots of cheese, sausage, almond pulp and nuts with me on this trip. The combination of snacks is perfect. sugar, fat and protein.”

“It’s wonderful to glide along the shores of Lake Rogen, seeing all the boulders you would otherwise have to negotiate on land, or paddling from Käringsjön into a maze of small lakes. But it’s not an easy trip. The small jagged lakes are not connected, so you have to be prepared to carry your kayak, sometimes for several hundred metres.”